In 2021, Eaton Vance Short Duration Diversified Income Fund (EVG) had massively upped its distribution to shareholders. In addition to that, the fund had gone through a tender offer to repurchase shares from shareholders. These were efforts implemented to get the approval to be bought out by Morgan Stanley (MS).

These efforts were largely popular. Our previous coverage noted that we anticipated investors to rush into the fund with its 10% target distribution. Since then, the price had shot up quite rapidly. It has been sliding since then, but that has been more a function of the NAV declining as well. At the same time, it has been hanging on to its rich value despite the slide in the NAV and in the face of a severe lack of distribution coverage.

When they originally announced the 10% distribution plan, I had made the false assumption it would be reset annually. In this case, they went with a monthly reset which didn’t take too long to realize once they announced the next month. Due to the sizeable gap between earnings and what the fund is paying out, this will generally see a declining distribution most months. The January distribution announced did buck that trend by increasing $0.0002.

This is mostly a similar situation that Eaton Vance Limited Duration Income Fund (EVV) is in. A lack of distribution coverage with a higher valuation. The funds invest somewhat similarly, but one of the main differences is that EVV doesn’t have any sort of stated target based on a specific percentage. That puts EVV in a more unpredictable situation. With EVG, we have a general idea that the distribution will be reduced if they don’t earn 10%.

For that reason, I could see EVG being a slightly better buy than EVV. However, neither one is particularly attractive at this time. This is even as I’m one of the biggest advocates of investing in Eaton Vance funds.

EVG is a relatively simple fund; they “seek to provide a high level of current income.” The secondary objective is to “also seek capital appreciation to the extent consistent with its primary goal of high income.”

To do this, their investment policy is rather flexible as well. The fund “will invest at least 25% of its net assets in each of the following three investment categories: [i] senior, secured floating rate loans made to corporate and other business entities, which are typically rated below investment grade; [ii] bank deposits denominated in foreign currencies, debt obligations of foreign governmental and corporate issuers, including emerging market issuers, which are denominated in foreign currencies or U.S. dollars, and positions in foreign currencies; and [iii] mortgage-backed securities that are issued, backed or otherwise guaranteed by the U.S. Government or its agencies or instrumentalities or that are issued by private issuers.”

That policy leaves them rather open to investing in just about any fixed-income investment that they wish. They also aren’t restricted to U.S.-based investments, though it makes up the majority of its holdings at this time.

They highlight that the fund can “provide broad exposure to the world’s fixed-income markets, offering investors a core holding that may complement traditional bond market investments.” They will also target a “low duration strategy, the fund provides limited interest rate risk, with no more than three years duration.”

The short duration is certainly appealing for the short term. As the Fed is set to raise rates, this fund should see less of a negative impact relative to other higher duration funds. The last Fact Sheet puts the leverage adjusted duration at just 1.1 years. This is helped because the highest allocation is to domestic senior loans in the fund’s portfolio.

EVG is a rather small fund with just under $300 million in total managed assets. It would be even smaller if you took away the total leverage of 28.8%. That would bring net assets to only around $180.46 million. 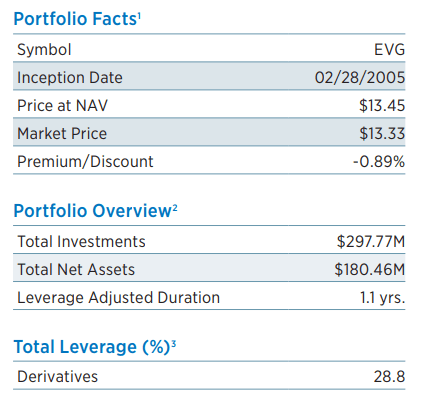 The expense ratio of the fund comes to 1.35%. When including leverage, it comes to 1.63%. Their leverage comes in two forms, borrowings which are fairly standard, and then derivatives. The interest rate for their borrowings is based on LIBOR plus a spread. Last fiscal year, they reported an average interest rate of 1.08%.

The portfolio’s derivatives are futures contracts, interest rate swaps, credit default swaps and currency exchange contracts. This makes the portfolio more complex but can also help the fund operate through a higher interest rate environment. These are the sorts of instruments that make EVG more of a black box.

In terms of performance, the fund has performed quite reasonably for a multisector bond fund with a short duration focus. With a shorter duration focus, you typically are investing in credit instruments that carry lower yields. As a credit fund, the yields you are receiving will dictate what your performance will generally be. Of course, we know there are various derivatives that the fund also employs, which are designed to hedge or enhance the returns.

For a comparison between EVG and EVV, we see that EVV clearly comes out ahead. That’s because the duration of EVV’s portfolio is considerably higher at 3.1 years. That implies that the yields they are collecting will be higher as maturity will tend to be longer. In a rising rate environment, such as the next year or two should be, we could see this performance flip.

That being said, it should also indicate that EVG can hold up better during panic selling. Below is a chart of total returns between February 19th, 2020, to March 23rd, 2020. That is the last major correction/bear market and lines up with the COVID-induced sell-off we experienced.

The fund’s valuation has risen quite sharply, as we suspected.

In terms of valuation, EVG at this time is trading at a 3.14% discount. That was based on the “old” yield though. I suspect that this bump could draw investors in over the next several months, pushing the fund to tighter discounts or even premiums. The fund touched premium levels once in 2007. Then it came close in 2012 and 2013.

Since that publication on June 24th, 2021, we have gone from that discount to a current premium of 1.99% currently. Though it was materially higher at one point, reaching nearly 4%.

This had started to pull back lately due to the NAV declines. Still, I’m surprised to see that it is now hanging on to such a premium. Investors can now see the distribution will probably decline every month due to overdistributing. 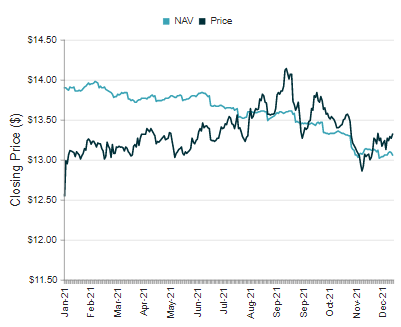 The latest distribution works out to 9.8% for shareholders at this time. On a NAV basis, it will hover around the 10% mark, of course, as the distribution is reset every month. The distribution from the first month to now has declined 5.23% already. That is since June of 2021.

During the last fiscal year, the fund reported net investment income of $11,863,734. That’s quite impressive, considering it was a substantial leap from the prior fiscal year.

However, that is still shy of the $18,011,015 it paid to shareholders for the year. Additionally, the fiscal year-end is in October – meaning that the full 10% distribution plan hasn’t been reflected yet.

Using the last announced $0.1088 distribution, we would have an annualized rate of $1.3056. It will be less than that, but for the sake of this exercise, that’s the amount we are going to use. Based on the shares outstanding of 13,417,575 – the fund would need $17,517,986 for the next 12 months. That’s why the distribution will be reduced every month because they won’t be able to earn that amount, so that NAV will be reduced.

For tax purposes, that has pushed the fund into relying more and more on return of capital. In this case, it is a destructive return of capital as it doesn’t cover its distribution through other means.

Despite being overpriced and lacking distribution coverage, one thing that should benefit the fund is that its portfolio could work relatively better over the next year or two. The reason for this is the short duration focus that the fund has.

As we mentioned above, the fund has a 1.1-year effective duration. When rates are rising, the lower this figure the better. It means that for every 1% increase in interest rates, the fund’s underlying bond value should decline by 1.1%. EVV had a 3.1-year duration, so a 1% change should mean a 3.1% decline.

This isn’t all bad, as rising rates also means more NII for the fund as yields increase.

For EVG, a large portion of their portfolio is in domestic senior loans. They should be the first to benefit from higher rates. Senior loans are often floating rate, and are why we’ve been watching the senior loan CEF category throughout 2020 for some opportunities. 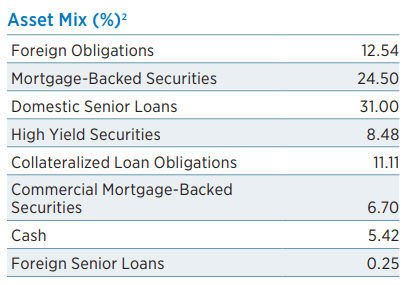 That being said, the overall portfolio is quite diversified, carrying other meaningful allocations to other categories such as MBS, foreign investments and high yield securities. They even have some collateralized loan obligations or CLOs. Those are often misunderstood and can be mistaken for collateralized debt obligations or CDOs. CLOs are essentially a basket of mostly senior loan funds that are separated into different risk categories or tranches that can be invested in. So when you see CLOs in a fund, it isn’t time to panic and run for the exit.

What is interesting for EVG is that despite the low 1.1-year duration, they still have a substantial portion of its portfolio in triple-A-rated instruments. 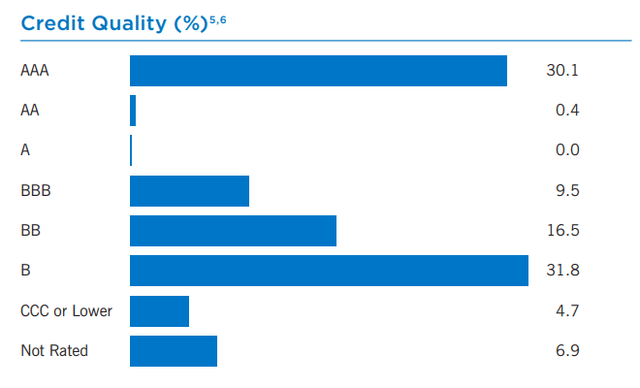 That helps balance out the much riskier side of B exposure the fund carries. Though it also contributes to why EVG has provided more moderate returns than many other “multisector” bond funds that load up almost all of their portfolio in junk-rated debt.

One final point is the portfolio turnover rate. Last reported for 2021 fiscal year-end came to 76%. That was one of the more active years. Generally, this has been closer to the 50% level over the last five years. It is still plenty sufficient to know they are actively making moves in the portfolio and not just sitting around. Some of that is due to their lower duration, which is impacted by shorter maturities, almost forcing them to keep capital moving.

EVG is in the same boat as EVV; they are overdistributing with no clear sign that a sustainable level can be reached in the short-term – even as rates are set to rise. That being said, EVG is in a position where we know exactly what is going on. They have a targeted distribution rate of 10% that gets reset monthly. EVV is a bit more up in the air, at least from what I could find doesn’t have any sort of target distribution. They have a managed plan that will keep paying the same rate until they decide otherwise.

That puts EVG in a bit better of a position than EVV, in my opinion. We know that they are overpaying, so we expect the distribution to decline as NAV continually erodes away. At the same time, both funds are on the richer side and are now flirting with premiums on a somewhat regular basis. That’s really what keeps me away from the funds despite the attractive distribution yields they show.

In the end, EVG and EVV can still be fine funds to own as long as one understands what is going on under the hood and sets realistic expectations.